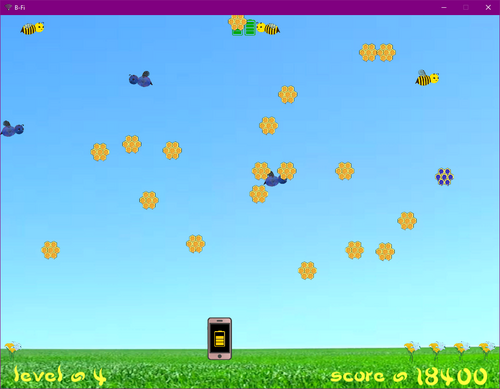 Based off the conspiracy theory that Wi-Fi is causing bees to lose track of where their home is and therefore dying off. After analyzing the time frame of a 72 hr game jam, I knew I had to make something that was fast and easy to learn to play with out the need for a narrative, which I decided to do an arcade style game based on the 80's. This is a shooter where the bees shot remain on the screen as honeycombs. This gives you bonus points at the end of level, but get in the way speeding up the bees descent to pollinate flowers at the bottom.

My daughter, AleeJoyGalaxy (15yo) made all the art assets. Another daughter MurFay (12yo) made the sound effects. We all had a great time doing this project.

1) Did we achieve the goals of the game?

We wanted a fun arcade style shooter based off the 80's that was easy to play and learn. Yes.
We wanted a "Conspiracy Theory" themed game. Yes.

2) Were the project's schedule, resources, feature set, and quality expectations realistic for achieving the set goals?

The original timeline of 48 hours wasn't quite enough. The extended 24 hours made it possible to complete the game with the MVP (minimum value to player) instead of focusing on the tinier details.

Teamwork was amazing.
Art was delivered in a timely manner.
Sound was recorded and mastered well.
Coding was created in a well organized fashion.
Level up bonus compromised to honeycombs still on screen instead of beehives.

Art started focusing on details instead of keeping in lean. After explaining the lean pipeline, art was given to par.
That pinaccle point came when the game was done enough and too much play testing was done instead of focusing on coding the next concept
Some technical ideas were not implemented due to time restraints.
I wanted something to fly around and eat the honeycombs to give bonus points.
I wanted trapped bees to not "go down anyway" to turn into beehives to give level up bonus points. (Removed once leveled up)
Making a build for WebGL did not load the game fully. It would get stuck just before the end. I made a build for Windows download instead.

5) What are the lessons we learned? (What can we do better on the next project?)

I feel that preparing the team for what to expect before jumping in at the Game Design Document phase would have sped up production.
Finding a musician for the project instead of searching for music would have increased the overall experience to gameplay.
Use a stable version of Unity instead of the latest version to ensure a good build can be made.